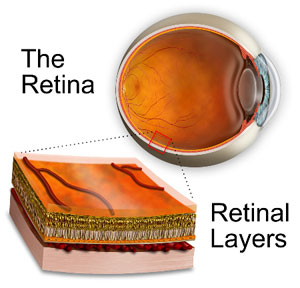 Symptoms you may experience if you have a Retinal Detachment include flashes of light that may occur in your field of vision toward the outermost periphery, a sudden increase in the number of floaters in your vision and possibly even a ring of floaters or “hairs” in your vision, a sense of a “shadow” in your peripheral vision that may progress toward the center of your vision, a sensation of a “curtain” or a “veil” being drawn over your vision and distortion of your vision so that straight lines, such as the edge of a door or walls, appear to be curved and in extreme cases you may experience a loss of central vision.

Exudative Retinal Detachment which can occur due to inflammation, injury or a Retinal Vascular Disease that causes fluid accumulation underneath the Retina without the presence of a Retinal Hole or Retinal Tear.

Tractional Retinal Detachment which can occur when fibrous or fibrovascular scar tissue has been formed on the Retina as a result of an injury, inflammatory disease or the presence of neovascularization, such as in Diabetic Retinopathy. The scar tissue actually pulls the Retina free from the underlying pigment layer it is normally attached to, causing a Retinal Detachment.

Treatment for Retinal Detachment will depend on the cause, type and severity but can include:

Cryopexy and Laser Photocoagulation Treatment to create a tiny scar around the edge of a Retinal Hole, or small Retinal Tear in order to prevent fluid from passing through the area and underneath the Retina causing or worsening a Retinal Detachment. Cryopexy uses a “cold” instrument, about the size of a pencil, to freeze the damaged area whereas Laser Photocoagulation Treatment uses a “laser beam” to achieve the creation of the tiny scar. Generally these two treatments are interchangeable but Cryopexy is often used if there is a considerable accumulation of fluid. Cryopexy is performed in an operating room, while laser treatment can often be done in the office.

Pneumatic Retinopexy is used to inject a “gas bubble’ into the back of the eye after first applying the laser or cold treatment. The patient’s head is positioned so that the “gas bubble” acts to place gentle pressure against the damaged area, allowing the fluid underneath to be absorbed and the Retina to reseal itself in place. This often requires that patients lie perfectly still in a particular position for several days or even a week in order for the results to take effect.

Scleral Buckle Surgery is performed by carefully sewing silicone bands in place in order to apply gentle pressure to the outermost walls of the eye so they move up against the Retinal Breaks, allowing the defect to close and the Retina to reattach. Scleral Buckle Surgery may be done in conjunction with Cryopexy or Laser Photocoagulation to assure the best possible results.

Vitrectomy is an increasingly common treatment for Retinal Detachment that involves surgically removing the Vitreous gel in the back part of the eye in conjunction with the injection of a “gas bubble.” In general, Vitrectomy is not the first surgery that is used to repair a Retinal Detachment because is often leads to the formation of a Cataract and should the initial surgery fail to allow reattachment of the Retina, the second procedure is often much more difficult and complex.

If you experience the sensation of a curtain or a veil in your vision or if your vision becomes “bent” or distorted perhaps with the sensation of a “bubble”, you need to be evaluated immediately for Retinal Detachment. Please call us, explain your symptoms, and schedule an URGENT appointment at Center for Sight in Fall River, Massachusetts at 508-730-2020. Please relay your symptoms to the receptionist so that we can examine you IMMEDIATELY!