Retinal Vascular Disease is a term used to describe a number of conditions that can affect the blood vessels and circulation of the retina and result in significant tissue changes with secondary complications and vision loss. The two most common retinal vascular disorders are Retinal Artery Occlusion and Retinal Vein Occlusion. 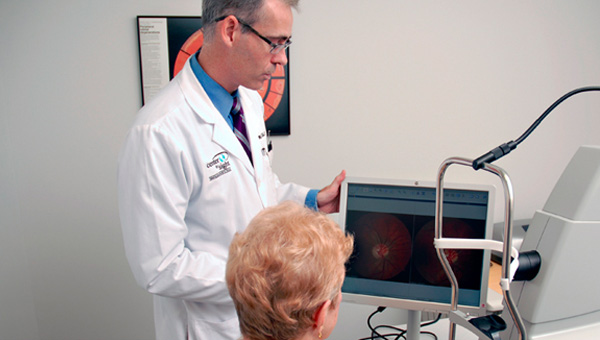 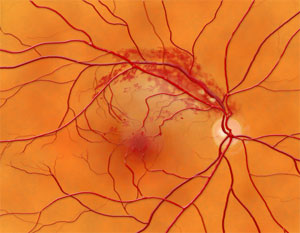 To diagnose a Retinal Vein Occlusion your pupil will be dilated so that Center for Sight Retinal Specialist Robert Kelly, M.D. can directly observe the retina using special instruments including the ophthalmoscope and slit lamp with a high magnification lens so that fine detail can be examined. It is usually necessary to have an Intravenous Fluorescein Angiogram (IVF) to study the blood circulation in the retina, as well as an Ocular Coherence Tomogram (OCT) to detect the presence and severity of Macular Edema, or swelling.

The main objectives of treating Retinal Vein Occlusion are to avoid and treat secondary complications. If there are areas of the retina that have been deprived of oxygen there is the risk of growth of “new blood vessels” or “neovascularization” which are extremely fragile and easily broken, resulting in hemorrhage and scarring of the retina with resulting vision loss. The new blood vessels may also cause a type of secondary glaucoma, called Neovascular Glaucoma. If you develop neovascularization, it will be necessary to use Laser Photocoagulation Treatment and Vascular Endothelial Growth (VEGF) Inhibitor Injections such as Lucentis® Injections, Eyelea® Injections or Avastin® Injections to stop the growth of these delicate blood vessels.

In the event that Center for Sight Retinal Specialist Robert Kelly, M.D. diagnoses you with a Retinal Artery Occlusion, or identifies a warning sign that you might be at risk for a Retinal Artery Occlusion because he observes the presence of a “plaque” in one or more of your retinal arteries, he will promptly refer you to your Internist or Cardiologist for thorough evaluation and testing including a blood pressure evaluation, electrocardiogram (EKG), fasting blood glucose, lipid and cholesterol levels, and hyper viscosity studies in order to help better understand your overall health. 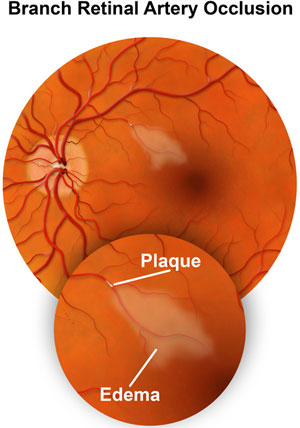 Central Retinal Artery Occlusion has typically been considered an emergency. It was felt that, if the clot or ‘embolus” could be dislodged within 90 minutes of the blockage, it would be possible to preserve vision. To accomplish this, a number of methods have been tried to dilate or widen the artery or to free the embolus including breathing into a paper bag to increase your blood carbon dioxide levels so that blood vessels dilate, massaging the eye, draining some Aqueous Humor fluid from the front of the eye and using various medications to lower the Intraocular Pressure to decrease internal eye resistance to blood flow as well as attempts to dissolve the clot. Some eye physicians might attempt these treatments if the occlusion were less than 24 hours old, however, large scale studies do not indicate that the final visual outcome of patients treated aggressively is significantly different than those treated conservatively.

If you have any type of systemic vascular disease and need to be evaluated for your risk of Retinal Vascular Disease such as Retinal Artery Occlusion or Retinal Vein Occlusion, please call us to schedule an appointment at Center for Sight in Fall River, Massachusetts at 508-730-2020.